The youngest founder member at the age of 8 of the Lytham St Annes Classical Association, Jonah Crouch, and Year 7 AKS student writes about his final classics lecture before moving to Madrid in January.

Dr Simon Elliott blew the audience away on Thursday with his speech on Septimius Severus. He was very knowledgeable about this subject and left us much more informed. My favourite part was when Caracalla killed Geta (both of whom were Severus’s children) because it just shows that the older sibling will always prevail – apologies to all those younger siblings out there but as an eldest child, it is the truth!

I also found it amusing that Severus decided to make the capital of the Roman Empire in York, in freezing cold England! While it did make sense to make the capital the place closest to the biggest battles, I am quite surprised he wanted to locate it so far away from everything else in the empire. 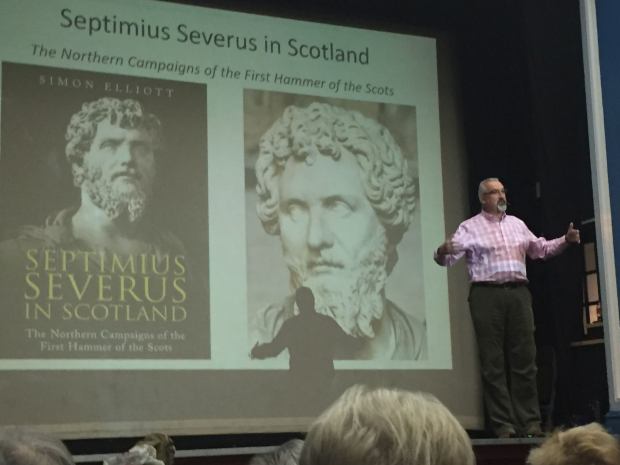 Educating 215 members of the audience about this fascinating Scottish campaign

During the lecture we discovered Septimius’s tragic ending in York – where he died after one of his campaigns – but also learned about his brilliant tactical skills in battle. One of his tactical deployments was used during a battle in Scotland: Septimius split his army between himself and his son Caracalla. Caracalla went off and blocked the exit across the Highlands whilst the navy guarding the sea meant that the Northern tribes had nowhere to run. Fans of Lord Of The Rings will recognise this strategy!

A fact-filled lecture ended my time with the LSA Classical Association. You have made my classics journey a brilliant one, inspiring me with every talk since I was 8 years old and just being an amazing overall part of my life. I will continue to forge my own classics path as I move to Madrid – where at least it is physically closer to the classical world (and climatically too)!”

The LSA Classical Association is the largest of its kind in the country and hosts its lectures every month in the AKS Senior School Hall.  All AKS students are entitled to free membership.  For more information follow: @lsaclassics